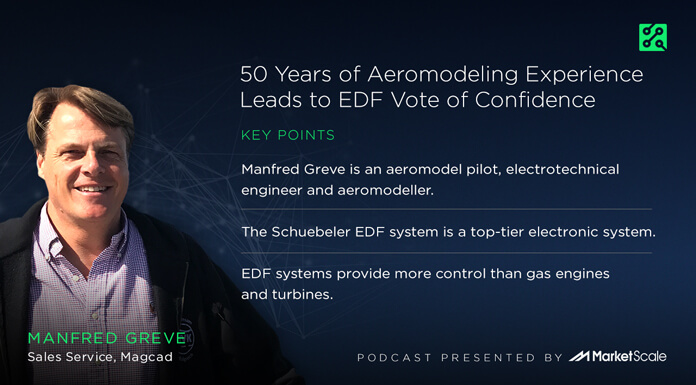 Aeromodelling enthusiasts across the globe enjoy the sport, speed, and excitement of piloting their model aircraft and roaring through the sky.  It’s a passion that comes from designing, tinkering, and refining your aircraft until it’s ready for its maiden flight. Then, if you ask any Aeromodeller, once you experience the joy of flight, you’re usually hooked for life.

That’s the case with Manfred Greve, a technical trainee at Lufthansa and electro technical engineer, who began his journey with aeromodelling when he was just a toddler and now has over 50 years’ experience.  In this episode of the Software and Technology Podcast, Manfred shares his knowledge from years of flying, aeromodelling, and why he chose to convert his model aircraft to electric ducted fan (EDF) technology. Listen to the podcast in the player or read the summary below.

To understand Manfred Greve’s enthusiasm for electric ducted fan (EDF) technology, you have to know a little bit about his childhood.

Greve’s father began aeromodelling in the 1950s and his love for flying model airplanes naturally transferred to young Manfred. His fascination started as a toddler, when little Manfred received a small wooden glider for Christmas and was soon flying it all around his home. He was a model airplane pilot at heart, and that love for building and flying only grew with age.

“When my dad came home from work in those days, he would sometimes go crazy because I did something I shouldn’t have done, but it was always interesting to face technical issues and adjust the plane into a better shape,” Greve said. “I tried a lot of different things with model airplanes, some of them unique. It’s trial and error, and trial and error, and then you suddenly get the improvement you wanted to have… it brings your heartbeat up.”

Little has changed for the aeromodel pilot of over 50 years. Greve has spent a lifetime tinkering with the designs of model airplanes, chasing that feeling he gets when that certain adjustment results in better performance. This passion has served him during decades of model plane-flying competitions, first as a 6-year-old with a glider and gradually progressing to regional and international events as an adult.

So, when Manfred was in a flying field with two other pilots around 10 years ago and saw firsthand how a plane fitted with EDF technology compared to a plane with a gas engine, he knew then and there EDF technology was the way to go.

Right away, he noticed that the gas engine took up to three seconds to respond to the pilot’s controls, while the plane fitted with EDF technology responded with virtually no lag time. He uses the analogy of driving a car to explain the difference between the two.

“Let’s say you’re driving eighty miles an hour. In three seconds, you cover a lot of space. It is very important for you as a driver in a car that the brakes or the accelerator react when you want them to,” Greve said. “And this is the biggest difference with gas engines and EDF. For an aeromodel pilot flying competitions, it’s very important to have the feeling on the stick. You do something on your control stick, then you really like to have the accurate reaction on the plane.”

Since that experience, Greve has made a focus of converting gas-engine planes into planes fitted with EDF. He partnered early on with Schübeler Technologies to build EDF planes during a time when smooth-running EDF planes weren’t widely available on the market.

The journey with Schübeler has not been unlike those childhood days in the basement, building bigger and bigger EDF planes that will compete with gas engine planes, but with lower noise and more consistency. Through a constant process of improvement, Schübeler Technologies, Greve said, has been able to duplicate the desired sound from a gas-engine plane, but without the off-putting volume. Schübeler EDF-converted planes sound like jet planes – like a dragon spitting fire – as Greve puts it, only at lower decibels.

“Only the Schübeler EDF gives you this sound because of its blade system.”

Greve points to his work with Schübeler on two planes in particular – the L-39 and the Avanti XS.

The L-39, a large, 25-kilogram model, was the first big Schübeler plane converted to an EDF system. Greve and Schübeler tried a lot of different versions to see how EDF would work with such a big plane. They started with a smaller amount of thrust – 16 kilograms – and gradually built up, building different motors and other components inside the EDF system until they had 25 kilos of thrust.

Greve and Schübeler run through an entire measurement system when converting a plane to EDF. They look at RPMs, voltage, air speed, temperature and other factors. The result, in the case of the EDF-converted L-39, is a plane that flies as well as the original, and sounds like the original, too, only not as loud.

With the successful conversion of the L-39, Greve and Schübeler turned their attention to another plane, one that perhaps would pose an even bigger challenge to convert to EDF technology. The Avanti XS is designed for aerobatics, which means the EDF system constructed would have to produce a large amount of thrust.

However, by making small changes to its EDF system, like cutting out some existing rips and building a better intake, they were able to create the thrust necessary for the EDF-converted Avanti XS to perform the aerobatics for which it’s known.

“In the aerobatic plane, you need more thrust because you want to go straight up and in every situation you want to have this good feeling on the sticks. You need thrust, thrust, thrust. That’s it,” Greve said. “Our RPM window is much lower. It is up to 20,000 or something. So it is not necessary to bring these high RPMs up and down. And this gives you the short reacting time on the stick.”

While sound is critical to Schübeler’s customers, consistency and efficiency are two other factors that separate Schübeler EDF conversions from their gas-engine counterparts, Greve said. With Schübeler EDF-converted planes, enthusiasts don’t have to worry about government regulations regarding noise or oil disposal.

“Electric flying is much nicer for a pilot because a gas engine or a gas turbine is always a little bit like a racehorse,” he said. “It has a good day or maybe it has a bad day.”

Schübeler makes the jump to EDF technology easy, Greve said. Whether you are looking for a plane that flies like a rocket, or one that simply flies smoothly, Schübeler can design a system that fits you. And if its advice you seek, the Schübeler team is comprised of enthusiasts just like you who love to share their vast experience, either in person or through the company’s website.

“Every single question that comes up, we are able to answer,” Greve said. “We are able to help by building something special for the customer. We are always able to help. You will always get a proper answer, what you need and where to get it, and then you put it in your plane and you should be happy with it.” 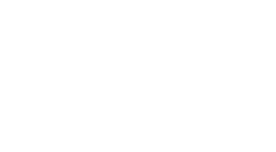